A History of the Boat House 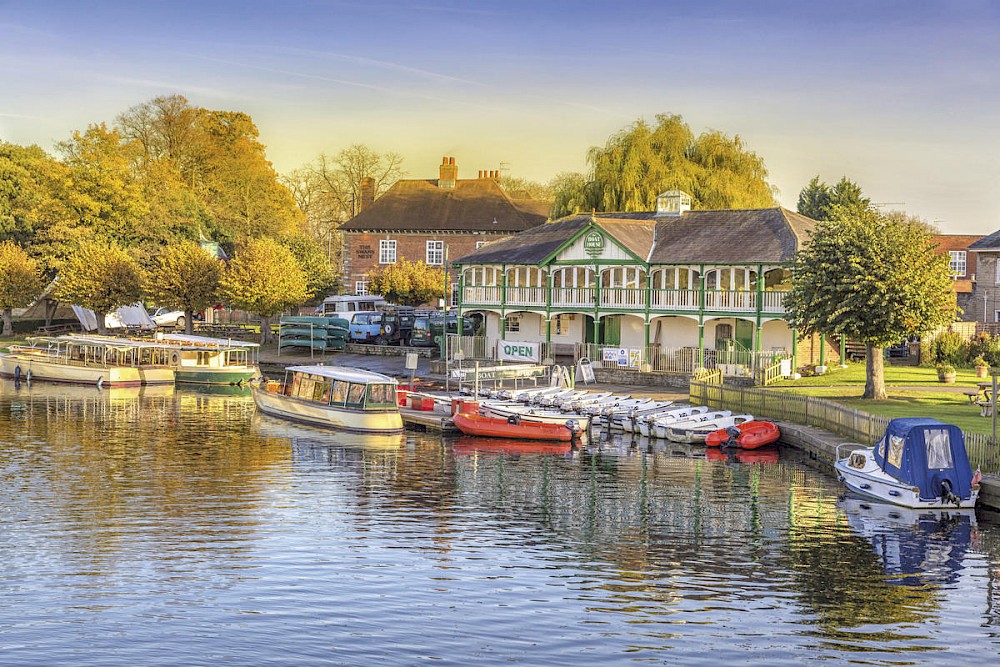 The Boathouse has been a notable feature of the Avon river bank for centuries, having witnessed countless river festivals, regattas, uncountable river goers as well as having had several inhabitants in the building itself!

Relatively little is known about the origins of the boathouse, perhaps due to its humble beginnings as a warehouse. Build on the south side of the River Avon, The Swans Nest Boathouse was likely constructed towards the end of the 1700’s or early 1800’s although an exact date is somewhat lost to the archives.

Initially, much less ornate and sizeable than it is now, the warehouse was well located to support the roaring river trade of the Industrial period. You can still see the original sizing of the building from the Tramway bridge. The position of the boathouse allowed for the fares of the river to be offloaded, transported through the warehouse, and loaded on to land transport on the other side. Alongside several small towns of the North Cotswolds, Stratford-Upon-Avon was granted a royal charter from King Richard I in 1196 to hold a weekly market, thus taking Stratford’s status from village to market town. However, it wasn't until the 18th Century Enclosure Acts that Stratford really began to expand.

Boasting the River Avon and direct access to the Roman Road, Stratford-Upon-Avon served as a key trade route for much of the surrounding areas and was known as the gateway to the British Canal Network with direct access to industry hubs such as Birmingham and Worcester, the boathouse was central to much of this activity. 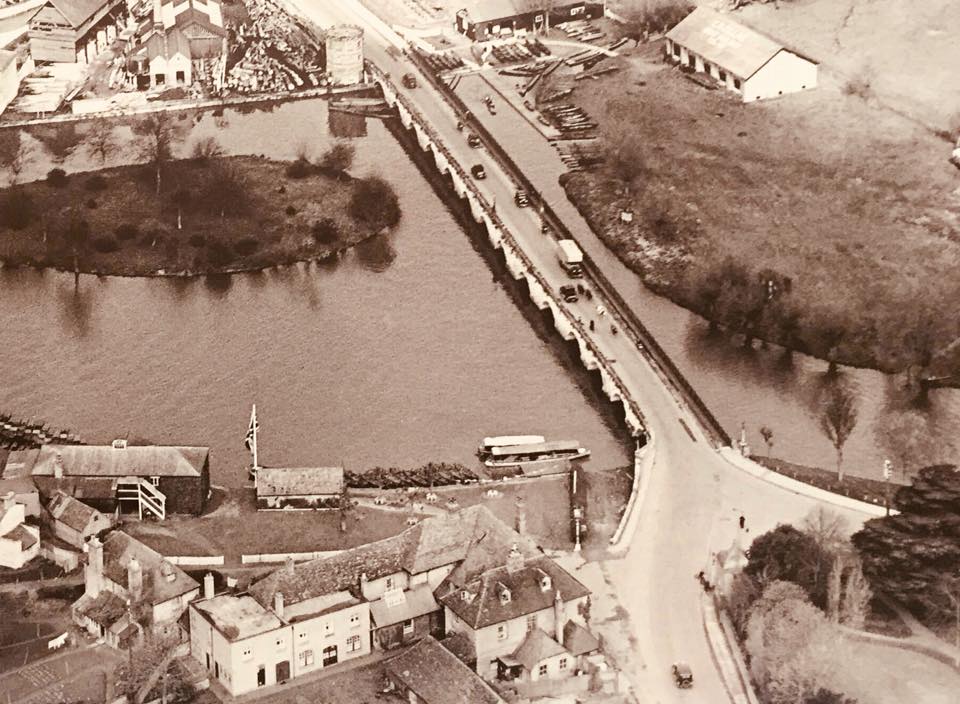 Due to the rise of the Victorian age of leisure, the River Avon had a new draw to visitors and residents of Stratford-Upon-Avon. Boating became an incredibly popular pastime and during this period and in response to this, an attractive wooden frontage was added to the boathouse and boat hire and excursions began to take place around the 1890s.

There is evidence that boating was taking place before this point but it is generally accepted that Avon Boating, as it is now known, started operations in ernest in the 1890s with 1898 seeing the maiden voyage of the ‘Swan of Avon’ a steam launch boat which has been delighting visitors ever since and after some recent renovations is set to take to the river again in 2020. 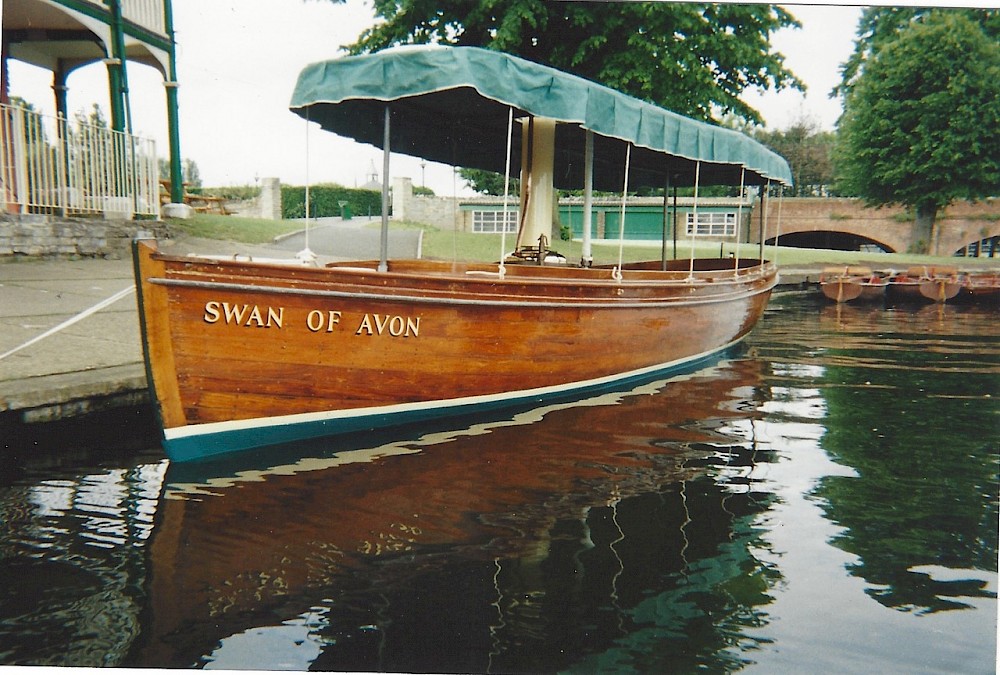 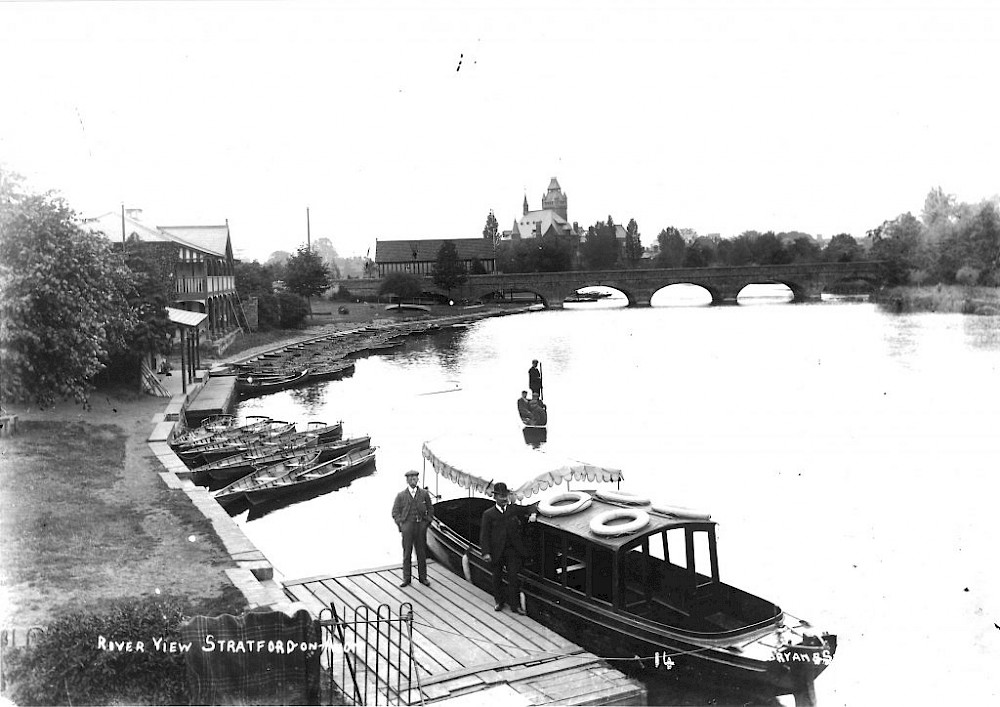 One of the most controversial and enigmatic residents of Stratford-Upon-Avon, Marie Corelli, could often be spotted in the early part of the 20th Century pootling down the river aboard her Venecian Gondola, the only one of its kind in the world! At 24ft long, it is the only 2/3rd sized gondola in existance and was manufactured as such to allow for its transportation from Venice in 1904 to the UK. The eccentric writer was the most famous novelist of her time and although very much a controversial figure, who has been all but deleted from the history of the town, her contributions to the conservation of Stratford-Upon-Avon are astounding. 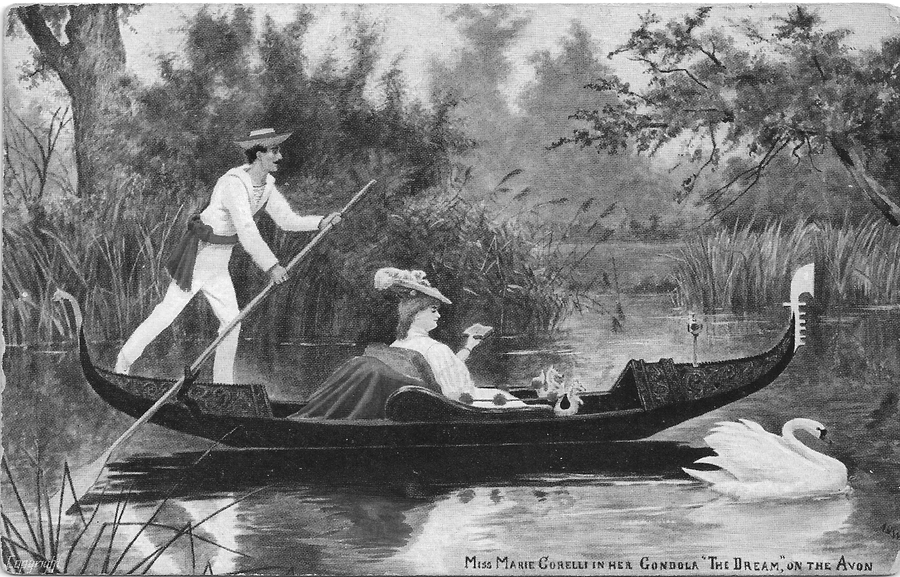 Her prized Gondola was put in storage after the death of her gardener-turned-Gondolier in the first world war. After Corelli’s death in 1924 her estate was entrusted to her dear companion Bertha until her subsequent death whereby everything was sold including the Gondola. After many years of tracing the movements of the Gondola it was discovered as part of a props department in London in the 1990s, it wasn't until 2010 that Avon Boating were able to convince the owners to sell the Gondola so it could be returned to its rightful place at the Boathouse and on the River Avon. The Gondola has now spent almost a decade bringing joy to many on the river and has even hosted numerous marriage proposals!

Throughout its entire history, the boathouse has been an active and working boathouse with trips and excursions taking place during the warmer seasons and maintenance and construction of the boats taking place year round. 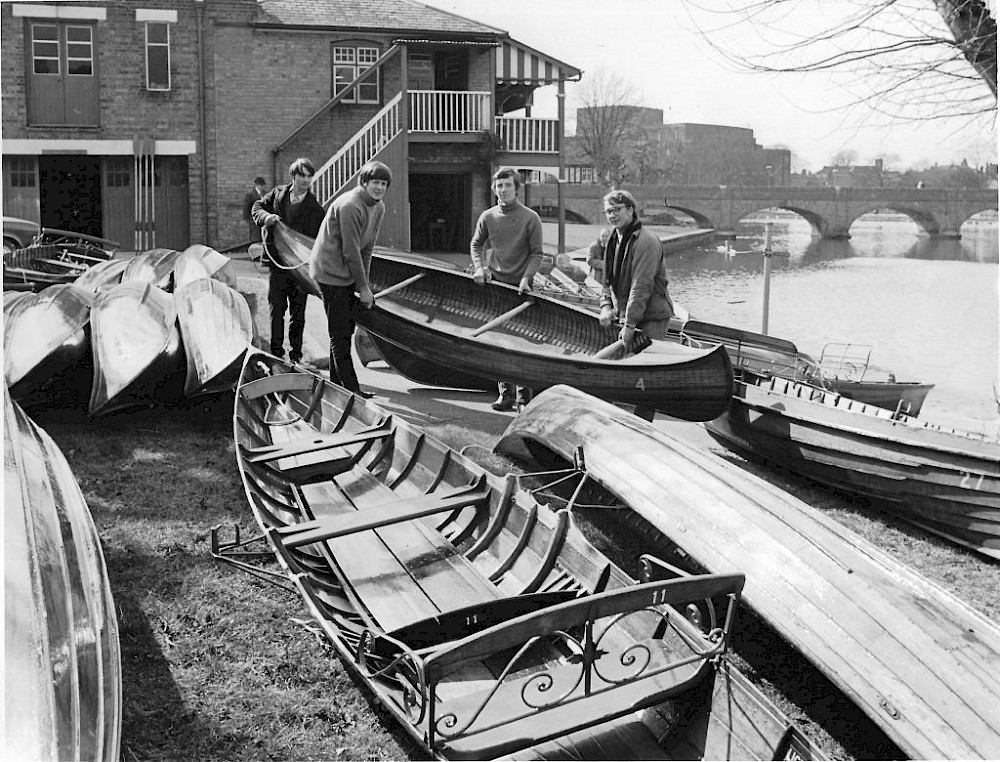 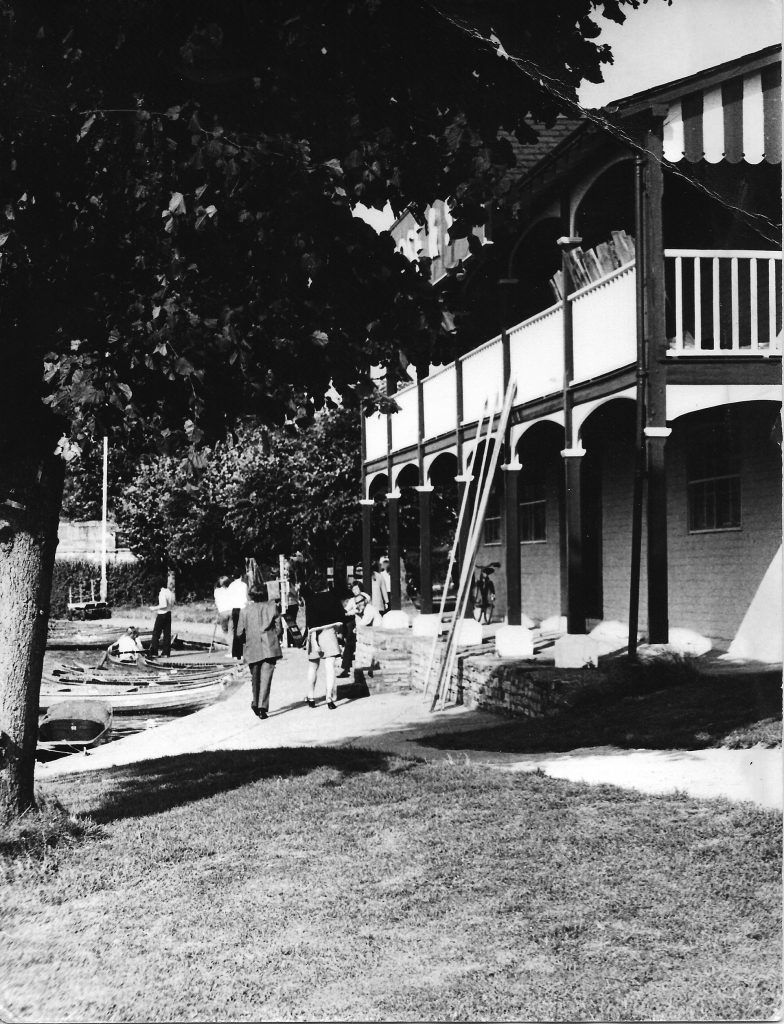 In the 1980s, the varnishing room was turned into a wine bar which was hugely successful at the time and eventually evolved into a nightclub. Many Stratford-Upon-Avon residents report great memories of dancing the night away to Duran Duran and Bonnie Tyler whilst overlooking the river. The relationship between the bar area and Avon boating was much diminished at this time as the bar was closed during the day so the daytime impact was lost. Eventually, the nightclub fizzled out and the boathouse was without an upstairs neighbour.

After a short period of closure, the upstairs of the boathouse was once again transformed, and with the vision of a talented French chef, became a chic restaurant after which time it was taken on as the Thai Boathouse - which is perhaps what most recent residents would know the space as until the end of 2018. After many years as the Thai Boathouse, the owners decided to relocate and once again the space was devoid of activity. 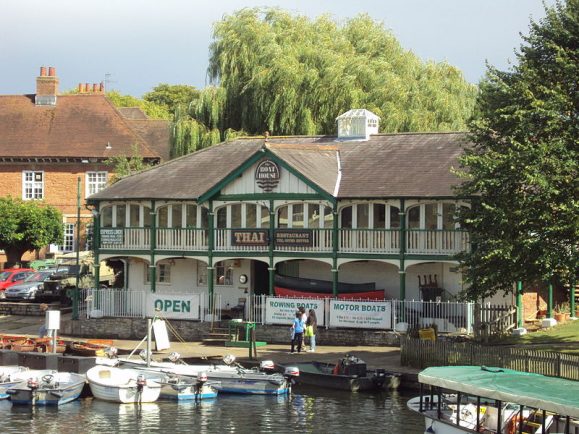 During the early Autumn of 2019, a new lease of life was given to the upstairs space of the boathouse. After months of heartfelt renovations, The Boathouse Riverside Dining and Bar opened in November 2019. Inspired by the best of British with a pop of European influence, the menu offered at The Boathouse is an evolving bill of fare sure to satisfy. Not just a place to enjoy great food and views, The Boathouse promises a wonderful atmosphere both in the bistro itself and in its impressively stocked bar and beer garden. The addition of The Boathouse will reinvigorate the building and brings it back to the hub of the culture of dining and nightlife in Stratford-Upon-Avon. The Boathouse has a long history of bringing joy to Stratford-Upon-Avon, visitors and tourists alike - with Avon Boating and the Boathouse riverside Bistro and bar at the helm, the legacy of the boathouse is set to continue long into the future.

Cookies are used to make this website work and to enhance your experience. To learn more about the types of cookies this website uses, see our Cookie Policy. We need your consent to use marketing cookies. Marketing cookies are used to track visitors across websites. The intention is to display ads (via third party services) that are relevant and engaging for individual users. Please select the checkbox below to indicate your consent.